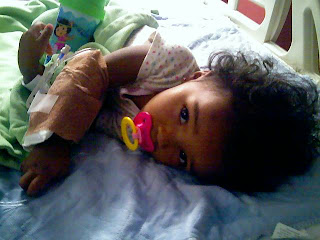 What a crazy week this has been. It all started last Saturday, We were at Jason parents house. I noticed Brielle was eating some Styrofoam. I pulled it out of her mouth the next thing I no she was throwing up. I thought maybe she had swallowed some of the Styrofoam and it had made her sick. We went home and bam it hit all of us the great full flu. It lasted about 48 hours in all of us. By Thursday I noticed Brielle was still not doing any better she was getting really weak and still throwing up, I couldn't get her to eat anything. She also had not had a wet diaper sense Monday. I took her in to the doctor and they gave her a iv. Hoping that would bring her out of it. I came home and she had one wet diaper form the iv. By Saturday and no more wet diapers and still she wouldn't eat or drink we took her in to the hospital. They quickly admitted her. I felt so bad she was so weak and so sick. They ran a bunch of tests. They were worried that she had some Styrofoam stuck in her lungs that she had aspirated it when she threw up. A chest x ray showed things were OK. Other test showed she had a bad viro infection and it had made her liver not function like it should also her potassium was at a dangerous level. And all her levels in everything where way bad. They kept her for the night, and gave her many IVs and tried to stop her from diarrhea. The next morning she was still not improving much. They notice her potassium had even dropped lower in the night. They tried to shove bananas down her but a one year old has a mind of her own. Finally they filled donuts full of bananas and got her to eat a few to bring it up a little soon she was running around the halls of the hospital making all new friends. Her doctor saw her in the hall way and said I guess its time for her to go home.She is still not out of the woods but is doing much better and getting stronger. What a stressful and emotional week it has been. To see your little baby laying there so sick and nothing you or anyone doing is helping her get better. Hopefully she is on the up stream now. One thing I learned also is you child has a little bracelet around her foot that you can't leave the hospital room with her. I thought i would take her out of her room to see the Christmas trees out in the hall way. I walked out of the room with her and set all the alarms off and set the whole hospital on lock down woops.
Posted by Heidi at 9:46 AM
Labels: One long week

I hope you guys are feeling better! Poor Brielle. :( It is so stressful when your kids are sick.

Oh no! I hope that she will continue to feel better. It sounds like you need some rest also.

OMG!!! Stef said she was sick and you might have to go to the hospital, but I didn't hear anything else. I hope it is all up hill from here. Sick kids are not fun. We love you Brielle!!!

I know exactly what that feels like. When Tyler was 1 he got pneumonia so bad he was hospitalized, with only a partial left lung, it was very dangerous. I know the worry that comes with that. Hang in there.

oh sad! i hope that brielle is doing better as well as the rest of the family! spencer and i had the 24 flu bug this week too...No FUN!

i also learned about the bracelet thing in the NICU with sophee...i asked if i could sneek her up to my room and the nurse said that the hospital would go on lock down if i did, but i kinda thought that she was kidding....haa haa guess not.

Oh man!! I am so glad she is doing better- I know how scary it is to have a sick child. I will keep you all in my thoughts and prayers! hug Brielle and her mom for me!

Holy CRAP! I'm soo sorry you guys have had such a rough week! YIKES! We had that flu here too, but it came and went away in the 48 hours. Poor Brielle!! I'm glad she is on the mend! I hope you are all feeling better! I'm sad we missed seeing you all over Thanksgiving! I hope this week goes better for ya'll!! Oh, and that is soo funny about setting the alarm off in the Hospital!! What a way to end with a bang!

i was meaning to call you all weekend!im glad she is doing a little better! if you guys are all feeling better soon, we might come spend a weekend down there before christmas... ill talk to you about it later though! hope the boys have fun with beau tonight!

I'm sorry to hear about your week. I am so glad Brielle is feeling better. That is so scary! Get some rest & have a great holiday. Miss you.

Heidi! I just now got your comment off my blog! I'm not the best blogger but it's fun. I'm so glad you sent us a xmas card! I can't believe how big Brielle is! She is adorable! Glad she's okay too. There's nothing worse than a sick child. I'm adding your blog to my list. I hope that's okay! Keep in touch!