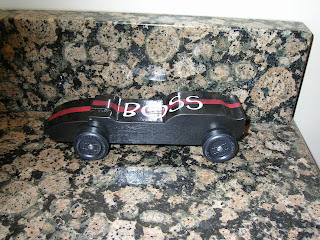 Boston's car took first place at the pine wood derby. Jason is the cub master in our ward and he lets anyone thats got a little brother not in scouts yet still build and race a car to. Its funny Jason spent like no time on Bostons car and it won first place out of like 20 cars. 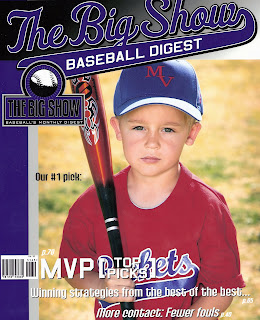 Boston just finished up his season of t ball. He is so cute and tiny in his uniform. he is half the size of all the other kids. Hes got mine and Jason's short genes. Its funny the first game of the season he 's best friend got him out on first base. and thats all it took him not to like the sport at all.
Posted by Heidi at 11:16 AM

Wow! Boston way to drive that car!! Great Job. I love the Baseball pics! Looks like you had a great time. We are so proud of you!!!

What a cute picture!! I'm so glad you won the race. Love Ya and see you soon

Nice job on the PWD car! It must of been FAST! You look like a mean baseball player in your picture! I LOVE it!! We sure miss you guys!