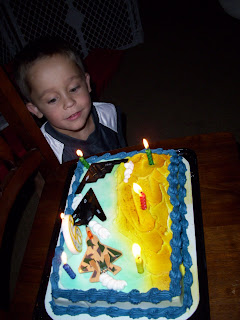 Boston had a fun birthday party. He had one friend come and spend the night and had cake and ice cream. 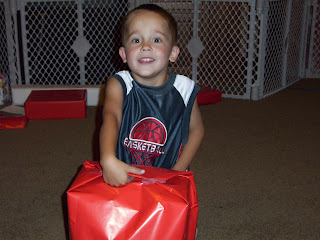 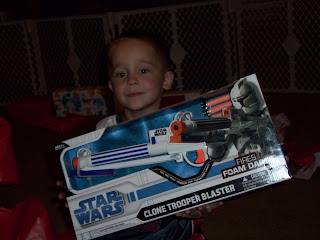 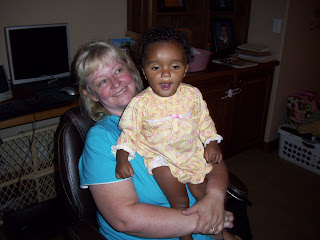 My mom and sister tiff came for the weekend and helped Jason out. we way appreciated it. 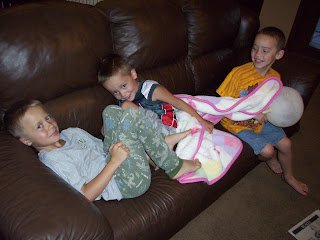 and for me I'm up a little bit more and feeling a lot better. I honestly have never expected it to be this bad. This is my 6 major surgery and I've came out of all the others great so I thought this would be a lot like it. But this has been horrible. I remember coming out of surgery and them asking if I felt alright. and I thought they got to have something wrong I not alive anymore or so it felt like it. I think it had a lot to do with losing half of the blood in my body, I would have to say that's the worse feeling ever. The nurses came in my room that night and were talking to each other and they were saying they had heard about this girl that lost a lot of blood during surgery and that shes totally white as a ghost and she is alive she just does not look it. then they turned around and they realized it was me. Doesn't that make you feel better. But I'm up and getting stronger everyday. I would just like to thank everyone that has helped so much. My mom has been such a lifesaver talking work off and keeping the kids so Jason could stay in the hospital with me. Also her and my sister Tiff coming and helping all weekend when I came home. and Jason sister Mindy for keeping the kids to. And for everyone thoughts prayers and phone calls they all been so appreciated. I wanted to tell you the story of the community shirt too. Bridger comes in one day with this shirt on I know we only have one of these shirts. the next day Boston comes in with it on. The next day Baxter comes in with it on and the next day Bridger has it on again. I don't think that Jason has even noticed that they keep taking it off and the next one just puts it on the the next morning and I have been way to drugged up to even care. I was finnally up enough yesterday to grab it and throw it in the wash. Jason has done awesome he has been such a good dad and husband. I 'm not ripping on him at all I just thought it was funny.

it's all so scary I am so glad that your doing better-Please know I put your name in the temple-I am hoping that you will start feeling better and you'll look back and be glad you did it.

Boston and the boys are getting so big! I hope he had a great b-day! Brielle is such a cutie!! She looks like a little girl now.-know I love you!

I am so glad that you are doing better. I wish I was closer to help. Take it easy! :) Talk to you soon.

I haven't checked yours in a while and just realize that I have been missing out and how you have been. I am glad that you are feeling much better. That is so funny that all the boys wore the shirt. You can say that it is a community shirt. :)