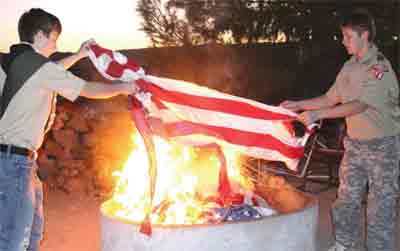 Retiring the Colors With Dignity


More than 50 American flags were retired at a Moapa Valley home last week in a solemn ceremony conducted by members of local Veterans of Foreign Wars (VFW) Post 8336 and Logandale 1st Ward Scout Troop 26. Each flag was burned to ashes and then buried in the desert as proscribed by various veterans’ groups.


Jason Baker, scout leader for Troop 26, said the scouts with help from the local VFW post conduct the ceremony once a year, “or whenever we get a stockpile of flags.”

Flags for last week’s retirement ceremony had been collecting for more than a year, Baker said.

The flags had come from all over southern Nevada including fire stations, and government buildings. Many of them were those that had been put up in Moapa Valley during holidays that had become unserviceable.

A set of rules of civilian flag courtesy popularly known as “The Flag Code” was first formulated by the National Flag Conference meeting in Washington, D.C. in June 1923. It was an attempt to collect all statutes, executive orders and rules of established custom and usage relating to the U.S. flag.

Although different organizations have slightly different ceremonies, they are all basic in extending the utmost in dignity and respect to retiring the flag.

“We generally get the VFW involved to give the scouts a good idea of the importance of the flag and what it means to all Americans,” Baker said.

Each flag is inspected with the sergeant-at-arms explaining “these flags have become faded and worn over the graves of our departed Comrades of all our nation’s wars.”

Each flag was then carried to a nearby fire by two scouts who placed it in the flames where it was consumed.
Posted by Heidi at 6:42 AM

awesome! way to set such an example of how the American Flag should be treated. good job!!

I haven't stalked blogs in a while so I was catching up. This reminds me of a similar ceremony I saw when I was in Young Women's. I am sure that Phil was in charge of it. I remember even now how touching and powerful that ceremony was. Thank you for this beautiful reminder!